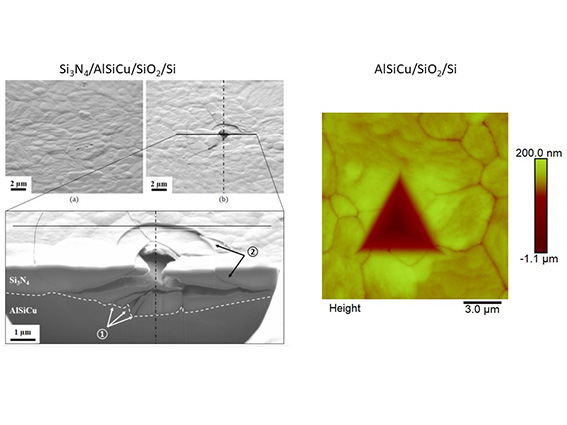 Functional devices such as microelectronic systems, solar cells and power devices are composed of complex stacks of various materials, including semiconductors, ceramics and metallic alloys. The knowledge of the mechanical response of those stacks is a key point, as they are submitted to harsh stresses during the fabrication process (induced by thermal treatments, mechanical polishing, packaging processes, …) as well as during the device lifetime.

We report the mechanical study of a microelectronic-dedicated stack where a silicon nitride (Si3N4) layer was deposited on top of a thick metallic alloy (AlSiCu) layer. In microelectronic chips, Si3N4 is widely used as a passivation layer, while AlSiCu is the electrical connection layer. The structure has been tested experimentally by nanoindentation. Multiple pop-in events were observed on the loading curves, indicating multiple cracking, with cracks initiated at various loading stages. The high reproducibility of the loading curves then allowed their full analysis by numerical modelling.

The complete damage process of the multilayer during indentation is analyzed using modelling by the Finite Element Method (FEM), accounting for plasticity in AlSiCu, crack propagation in the Si3N4 layer and possible delamination at the interface between the two layers. The various stages of the damage process occurring in the Si3N4 are elucidated, showing in particular the occurrence of a first crack in the region underneath the indenter (hence not visible by a surface observation), followed by a second crack forming further away from the indenter, on the top surface of the layer. Moreover, a novel procedure for the identification of the Si3N4 layer tensile strength is presented, using an inverse method based on FEM simulations and experimental data. The results of the simulations (cracking patterns and cracks locations) are also further validated by the observation of structure cross-sections with a Scanning Electron Microscope (SEM) after Focused Ion Beam (FIB) milling of the sample. In addition, the proposed identification procedure is quite generic and can be adapted to other systems showing similar multiple-cracking patterns under indentation.