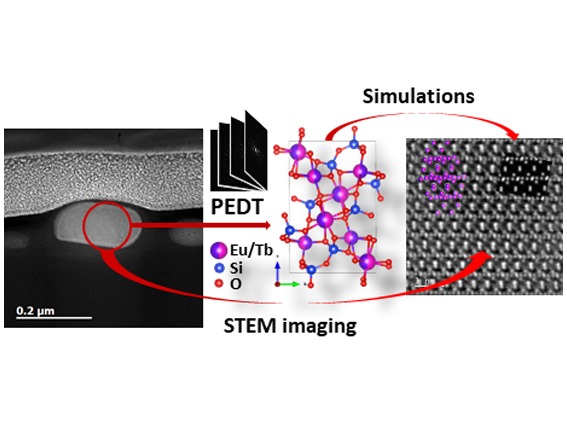 Abstract : Codoped (Tb,Eu) ZnO films grown by magnetron sputtering on a silicon substrate and annealed up to 1200 °C showed intense photoluminescence (PL) emission from Eu3+ ions. The high-temperature annealing led to diffusion and segregation of rare earth (RE) elements toward the bottom of the film, which induced the formation of nanometric Zn-free inclusions responsible for remarkable PL emission intensity. Combined electron diffraction, chemical contrast imaging, and optical studies of these nanometric phases have been carried out. Large inclusions of zinc silicates and RE silicates a few hundreds of nanometers in size were observed, embedded in a silica phase. The structural determination of these RE-rich inclusions was carried out by combining atomic Z contrast imaging (high-angle annular dark-field imaging) and precession electron diffraction data. Upon annealing at 1200 °C, it appeared that the structure was related to an F-type disilicate structure. Energy-dispersive X-ray spectroscopy and electron energy loss spectroscopy experiments were carried out to determine the ratios between elements and the oxidation states of the RE elements in the abovementioned inclusions. A (Tb,Eu)2Si2O7 formulation is proposed from dynamical precession electron diffraction tomography refinements, leading to a +III valence state for the RE species in agreement with spectroscopic results. PL modeling is also in good agreement with the experimental data. These results complete those obtained at 1100 °C for which the inclusions were identified as some RE10–x(SiO4)6O2–x oxyapatite structures and pointed out a combined structural and PL properties’ evolution between 1100 and 1200 °C annealing temperatures.